The event was a grand opening of Heritage Park Senior Village, a brand-new, three-story building with 76 apartments. But to the nearly 100 people who gathered to celebrate the milestone, it was more than that. "This is not a building," said Vice President of Housing Karlynne Tucker-Scaggs. "It is a community. It is a home." 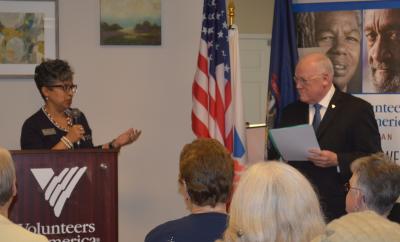 Mike King, Volunteers of America national President and CEO, who flew to the Detroit area to attend the ceremony in Taylor, put it another way.


"We truly are in the love business, and this beautiful building is what love looks like," King told the standing-room only crowd, which included many new residents of Heritage Park. "I hope you all are proud of what you've done here."

There was another reason the grand opening of Heritage Park Senior Village marked a significant milestone in the nation's efforts to provide safe, affordable housing for low-income seniors.

Heritage Park is one of the last projects in the nation completed under the U.S. Department of Housing and Urban Development's Supportive Housing for the Elderly program. The program, which fell victim to the "budget sequestration" in 2013, allows residents ages 62 and older to pay no more than 30 percent of their adjusted income on rent.

While Congress has not authorized renewed funding for the program that made Heritage Park possible, King paraphrased the late baseball legend Yogi Berra in offering some hope for future projects.

"It's not over till it's over," King said. "There's a rumor that this is the last one. Does that make any sense to you? I don't think so. I think we need a campaign to keep building affordable housing for seniors."

Mike Polsinelli, Field Office Director, Detroit office of the department of Housing and Urban Development, praised the work behind Heritage Park and other Volunteers of America communities.

"I've said this before, but it bears repeating: VOA is a proven partner with HUD."

With senior housing in short supply in Wayne County, the building already is filling up. Several seniors have moved in, and many more have applications pending.

"It's nice for seniors because seniors normally don't have a chance to have this nice a building," said one of the first residents, Sylvia Brown. "I'm very happy here and I love it here."

Heritage Park is a smoke-free, three-story building with on-site laundry, a community room, library and computer center and walking trail. Pets are allowed, with restrictions. Seniors interested in applying should review the property online, contact Sheri Hall at shall@voami.org or call (734) 486-7000.

During her dedication of the building, Tucker-Scaggs thanked everyone who contributes to Volunteers of America housing efforts.

"I just have a full heart seeing all these faces here today, knowing we can provide housing to seniors here in Taylor," she said. "I'm honored, and my heart is full."

Photos from the grand opening