"Giving back is part of our core mission at Cloud Cannabis, and we believe in making a difference where needed most. Veterans have given their lives to protect us, and many of them are in dire need of community support. At Cloud Cannabis, we believe in creating healthier and happier communities, and we truly hope to expand that goal through our Cloud Cares program by providing much-needed funding to vital organizations that support veterans in the communities we serve.”

Cloud Cannabis, a Michigan cannabis company that’s on a mission to destigmatize and demystify the cannabis shopping experience, donated $6,250 as part of its second annual Cloud Cares holiday campaign.

This donation will contribute to the recent upgrades made to the Detroit Veterans Housing Program. This building received a facelift that will better serve our nation's heroes. 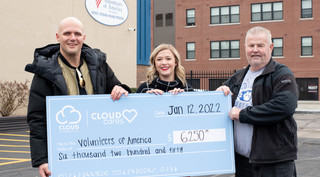 "[This] donation is going to make a difference to help rehab our Detroit Veterans Housing Program and make sure that we are putting our veterans back on the path to success and creating stability for our heroes who gave us so much."

Throughout his life, Kenneth, a United States Marine veteran, has faced several difficulties. Nothing compared to going through his divorce. To say that things have been rough would be an understatement.

“Getting over this divorce, has been the biggest challenge I’ve ever had, more than the Marine Corps, more than anything.”

Kenneth is a family man, making his divorce even harder. After using all of his savings to stay in hotels, he had nowhere to go. Trying to cope with his depression, Kenneth developed substance abuse problems.

“[VOA’s services] are lifesaving. Not only for me, but for the other people here. They know where they could have been without this program. Everybody would be lost.”

After coming to our transitional housing for veterans, Kenneth found work at the VA. He is working on his recovery, and setting goals for the future.

Cloud Cannabis is ensuring heroes have stability and shelter during their darkest days.